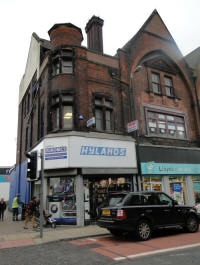 The idea was a bit of fun and publicity for Hyland's, but also I was curious as odd things have been reported to me by many people and a group from Spi-rit had done an investigation back in July, they had found 2 male spirits and a female one, they had even given us a name and nickname. We purposely didn't let slip prior to Signals arrival what the previous mediums had told us, this was a test to see if it was all 'Mumbo jumbo' or not, I only told Helen of the previous mediums visit upon her arrival and we wanted to see if her findings would match. (Putting the pressure on her somewhat)

She also came up with a name Elizabeth when she first entered the building, later I was looking through the old deeds for the building we had got out especially as we didn't know much about the history and I found some old plans for the whole block - each property had a name and Hyland's was named 'Elizabeth' on these old plans (Helen hadn't seen these)

Helen came up with a female and named her Mary (She mainly wanders our first floor cooker room keeping herself to herself - there was a Mary Frances Cunliffe mentioned in the Deed's who dies 8th Sept 1948 - she was related to John Henry Cunliffe-Boardman who owned the building and who died 11th Dec 1917, the block was originally known as Boardman Buildings)
and as we progressed around the building she sensed 3 other spirits, somehow she got the name of Edward and thought he also went by the name of 'Jed'
(Incredibly similar without any clues - Helen tuned into this name that we had previously been given)

She also gave us another name and a description (We are keeping this logged but to ourselves as a test for future investigations)
The only menacing spirit was the one in our attic rooms - she felt as though someone had been trapped up there at some point and also felt an energy trying to push her at the top of the stairs, she felt as though someone had fallen down the stairs and she and some of the others saw a dark shadow behind Perry near the spot my daughter and taken the strange shadow photo below:-

Poor Andy - He has to work at number 24 The Stand Longton - will he ever dare to go upstairs again!!!! 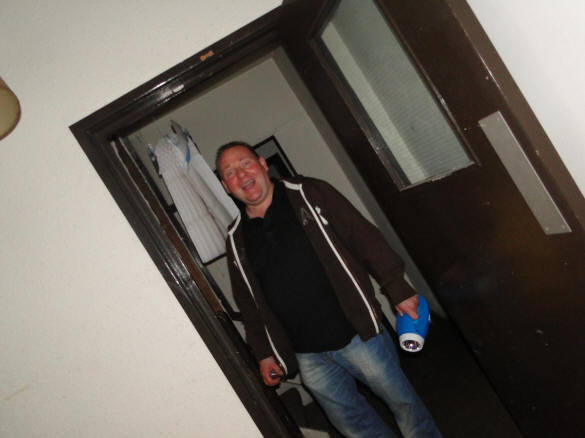